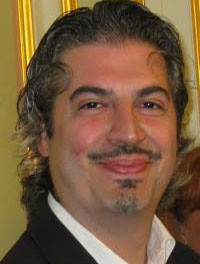 LEONARDO SAGLIOCCA is an italian bass-baritone.

He was born in Florence. After an audition with the world famous baritone Gino Bechi, he was encouraged by him to begin the Opera singing career and began singing studies in the Scuola di Musica di Fiesole under Elio Lippi, Donatella Debolini and Gianni Fabbrini. This school of music was founded by the world famous viola player of the “Quartetto Italiano”, Piero Farulli. After that, Leonardo Sagliocca continued his formation in the University of Music of Florence, the “Conservatorio Luigi Cherubini” under the scottish soprano Kate Lafferty Gamberucci.

At the age of 23 he was noticed by the world famous italian baritone Rolando Panerai who immediately invited him to join his class of international singers and engaged him for the operas "Il Barbiere di Siviglia" by Gioachino Rossini, "La Traviata" by Giuseppe Verdi and "Gianni Schicchi" by Giacomo Puccini. In 1996 he was invited also by the great baritone Leo Nucci to sing beside him in Verdi's "La Traviata" and to join his class.

Leonardo Sagliocca won the 1998 edition of international competition “William Walton - the actor-singer”,sponsored by The Prince of Wales, Charles, which gave him the chance to improve his acting and singing talents with world famous artists like James Lockhart, Graziella Sciutti, Jonathan Papp (Royal Academy of Music, London), Harriet Lawson (Rossini Opera Festival), Corradina Caporello (Juillard School, New York) and perform the opera "Gianni Schicchi" by Giacomo Puccini in front of the Prince. During this Master Class Leonardo Sagliocca was invited for a scholarship at the Royal Academy of Music of London.

Other peaks of his career:

In 1999 he was singing in the Dome of Genova (Genua, Italy) with the Orchestra of Teatro Carlo Felice, the main theater in Genua, under Herbert Handt. The same year he was invited by the great specialist of Rossini's Operas, Luis Alva, to sing the role of Mustafa in the Opera "L'Italiana in Algeri" of G.Rossini in Lima, Peru.

Also in 1999 he was invited in Lucca by the american former tenor and conductor Herbert Handt to sing world premiere of works by eminent composers. The most famous one, winner of the Academy Award for his career, Ennio Morricone, author of many unforgettable soundtracks of famous movies like "Days of Heaven", "The Mission", "The Untouchables", "Nuovo Cinema Paradiso". Ennio Morricone was present at the rehearsals and at the concerts, cooperating with Leonardo Sagliocca and the other musicians.

In 2005 Leonardo Sagliocca is invited at a very important season, The South Bank Centre at the Queen Elizabeth Hall in London, the season of the London Philharmonic Orchestra.

Following, a "resumé" of the entire career of Leonardo Sagliocca:

He began the soloist career in 1993 in Italy and all over the world, in the fields of symphonic, oratorial, operatic music and from the middle age music to the contemporary.

He sang for the first time in the world works by Ennio Morricone, Luca Lombardi, Franco Mannino, Fabio Cifariello Ciardi, Riccardo Riccardi always in front of the composers and under their supervision.

He is permanent member of high level Ensembles like the "Ensemble San Felice" of Florence,Italy, the "Nuova Cappella di Palazzo" of Lucca,Italy and the “Cappella Musicale di Santo Stefano” of Prato, Italy

He is co-founder of the "Ensemble San Felice", a vocal and instrumental group specialized in early music, with original instruments. Last year the Ensemble celebrated the 23rd  season with titles as the "Six Brandenburg Concertos" of J.S. Bach, "Vespro della Beata Vergine" of C. Monteverdi, Haendel's “Messiah” and “The Fairy Queen” by H. Purcell.

He cooperated as talent scout, teacher and soloist singer with the "Maggio Fiorentino Formazione", the formation agency of the main theater in Florence and one of the more historical and important festivals in Italy, the "Maggio Musicale Fiorentino".

He recorded actually 8 cd's published and sold all over the world for the following labels (Tactus, Bongiovanni, Kicco Classic, Clavis, Brilliant Classics).

He is the Founder and Artistic Director of the “Florence International Choir Festival” and invited as member of the jury in important Festivals like The Singing World in Saint Petersburg, the Choral Festivals in Bratislava, the Credo Festival in Tallinn, the Nederlands Koor Festival in Haarlem, the Mozart Festival in Prague, the Juozas Naujalis Choir Festival in Kaunas, the Monteverdi Choral Competition in Venice.

He is also regularly invited as member of committee in official auditions.

He was invited last August 2014 as lecturer in the 10th World Symposium on Choral Music in Seoul, South Korea.

Leonardo Sagliocca is also the creator of the season “A Night at the Opera in Florence”, Italian Opera & Baroque. Young talents and international acclaimed singers from all over the world.